What is the performance of your users devices?

The first advice I give when I talk about measuring performance is to test your app on a lower end device.

The question is: how low end should you go? What is the performance of the devices your users are using?

we can establish a baseline!

Attributing a performance score to a device

This is what Geekbench does for us. It runs some benchmarks on phones and attributes a CPU performance score. For instance, here's the result for an iPhone 13

When running, an app will spawn multiple threads. For instance, an Android React Native will likely spawn:

Below is an example of threads using the most CPU in my app, measured with this Flipper plugin 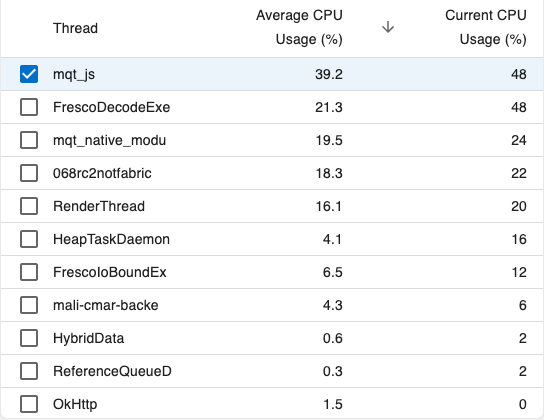 Single-Core score correlates to the processing power of one CPU core only, basically how fast you can run one single thread. Multi-core score by opposition is how well can you run multiple processes in parallel.

For mobile apps, Single-Core is particularly important, as some threads can induce heavy calculation and can't be parallelized easily:

For instance, the Samsung Galaxy A21s, one on the most sold phones, scores 170 in its single core benchmark

Let's check the results for some of our apps.

How to read this graph? Well for instance:


This is actually lower than what I expected! Which means a lot of users with low end devices are using the app, so we should ensure their experience is good.

Also, it's safe to say there's a big disparity between Android and iOS! 😅
On average, iOS devices run 5 times faster!

This is why React Native apps tend to run much better on iOS (and also the reason why I tend to focus on Android when measuring performance).

This is because a lot of lower end devices on Android are quite popular! Here's a breakdown of the top 5 Android phones for this app:

We actually get similar results in multi-core:

(if you're wondering, the very powerful device on the far-right is an iPad Pro)

iOS is still the winner here, even though this time, it's only 3 times faster on average. This is because even low-end Android phones tend to have a lot of cores (6 or 8) compared to iOS phones.

The results are very similar:

The most sold Android devices differ only slightly:

Based on this evidence, it is crucial to use a low-end Android device to measure performance. If you just test your app on an iPhone 13, you will miss most of the issues that your users can have on the widely sold A21s, which runs 10 times slower.

Embed Cordova in your native iOS or Android app